I’ve been watching a lot of YouTube videos about sumps and overflows lately – and I am contemplating replacing my Hydor canister filter with a sump. Challenge is with the stand that I built – and getting a suitable sump to fit.

As luck would have it, after adding a few new fish to the aquarium, the impeller decided to blow up. As I haven’t been able to move forward on the sump – I had to get the filtration running ASAP, so I ended up purchasing a new canister filter from the closest pet store, Petland.

The new additions to the tank included 4 more Denison barbs – these ones are pretty young and only about 1.5-2″ long right now, but are schooling great with the older ones that are about 3.5″ now. I also added 5 little Julii Cory’s to help out the 3 clown plecos (that I rarely see). I still only have the one discus – would like to add a couple more at some point.

I would have just replaced the impeller, and I had actually been searching for one as a backup. Unfortunately I was unable to find one in town or online. It’s a shame, as the Hydor 250 has been working very well, and I had the filter cleaning process down.  I might see if another brand of impeller might be suitable, or perhaps see if I can cast a new blade.

The new filter I picked up is a Fluval 406 – it’s good for up to a 100 gallon tank. In setting up the filter, I replaced the carbon pouches with more bio media – the stuff I had already in the Hydor filter, along with a bunch of the Eheim substrata sintered glass spheres.

The media boxes don’t feel as durable as the Hydor trays – the plastic feels more brittle – but we’ll see how things go.

Some of the nice features are the quick release hose assembly at the pump – will be interesting to see how well it works in a week when I give the pre filter it’s first cleaning. The other nice feature is the priming pump – while it doesn’t feel very robust, it did work very well.

The pump did not come with any sort of pre-filter for the intake, so I might look at adding one in the near future, and it also didn’t come with a spray bar. I prefer that to the included spout, which seems a little aggressive – fortunately I was able to reuse the Hydor spray bar.

While spending time in Victoria, I discovered a delicious apple cake at a coffee shop called the Nest. Now that I’m home, I’m trying to find a recipe that comes close.

This one turned out very good – and is a little lighter than the Nest cake which is not a bad thing! I also had some zucchini that I wanted to use up. Next time I make this, I think I will use a full teaspoon of cloves, and maybe add a half teaspoon of ground ginger. 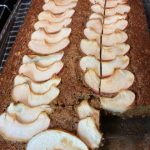 This is a recipe from a friends mother – it’s pretty flexible and easy to make. So far I’ve used it to make Saskatoon Berry Scones as well as Blueberry Scones. 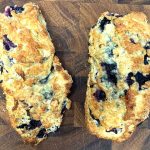 First time making this recipe I made the scones with Saskatoon berries.  I over mixed these a little – making them a bit dense.  The Blueberry scones I worked much less, and the result was much nicer 🙂

Decided our knife block was taking up too much space on the counter. It also interfered with the microwave door if knives weren’t put into specific locations. Another motivation was to store my knives that would also display some of them – particularly some Japanese knives that have some amazing damascus patterns in their steel.

I do have a couple magnetic knife strips designed to just mount on the wall, but unfortunately there was no convenient wall large enough to hold the strips. The strips are also bare metal, and thought they might not be too kind on the knife blades. My approach would be to insert magnets from the back of the rack, so the knives only contacted wood. I also wanted the knife rack to store a sharpening steel and ceramic honing rod.

After doing a few sketches in Photoshop, I made up a simple cardboard mockup of my design. The purpose of this was to determine the best angle for the knife rack so that it would accommodate my knives and also a sharpening steel & honing rod – without impeding access to space below the rack. Once I had those details sorted, it was time to see what wood to make the rack from. 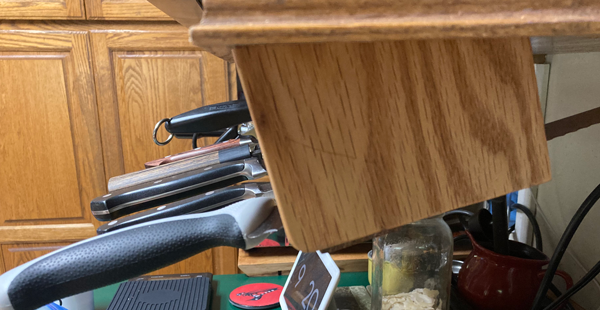 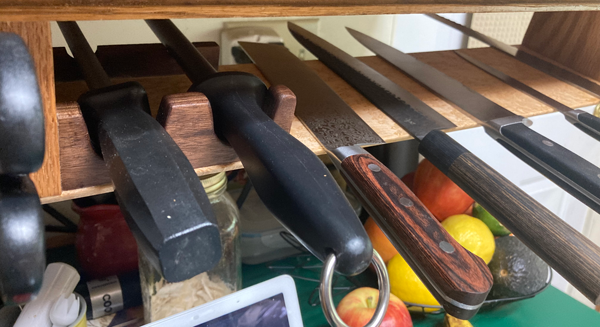 I had an old board of some very figured birds-eye maple to use as the primary ‘shelf’ to hold the knives. I used some red oak for the ends of the rack. These would also serve as the mounting point to the underside of a microwave shelf. I also had some small bits of black walnut to make a simple holder to store a sharpening steel and honing rod.

I needed to resaw the birds-eye maple to make the thinner shelf. I then ran the pieces through the thickness planer to clean up the saw marks. There was still a fair bit of sanding required despite the very sharp planer blades due to the wildly figured maple.

I cut a couple dados in the back side of the maple that will hold some neodymium bar magnets I got on Amazon (the ones I used were 60mm x 20mm x 5mm). The dado left about 1/8″ of wood. The magnets are very strong, and very effective even behind that much wood. I created similar dados in one of the oak end pieces as well. This provides a spot for a pair of kitchen shears. To fill the dados after the magnets were glued in I made oak plugs for the end piece. I just used a thin 1/16″ strip of oak to cover the magnets on the underside of the knife shelf. 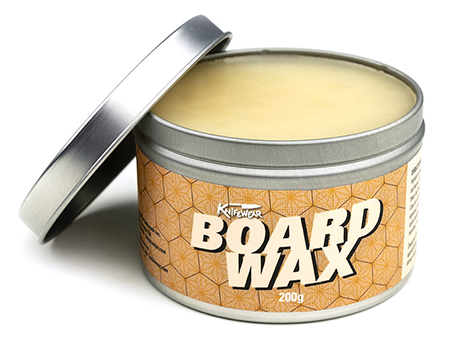 To finish the knife rack, I used Butcher Block wax from Knifewear – it’s a soft, food safe paste wax made right here in Edmonton. I slathered it all over the rack and let it sit for 15 or 20 minutes, and then rubbed the wax in. I did this a couple more times (using less wax than the initial application) and vigorously rubbed the wax in. The result was a satin sheen that really looks good. I’m also using this stuff on my cutting board instead of the mineral oil I used previously :).

I did sort through our knives a little – leaving room in case another new Japanese knife happens to need a new home :).

Finally decided that it’s time to let go of my record album collection.

I began collecting in the 70’s up until the end of the 80’s when I packed it all up. My collection was stored away for many years, and then it seemed records were a thing again (and I was getting tired of mp3’s). In the mid-2000’s I unpacked everything, and started to enjoy it again.

Slowly I have been cataloging my collection on Discogs, and I’m just over a third of the way through it – that’s just under 300 entered in!. From my collection so far I’ve listed 10 albums for now and will see how things work out.

I’m using Discogs as a guide to set pricing for some of my albums and seeing what happens. I still have to go pick up some packing material. It’s surprising what it costs for packing and packaging materials.

I have a number of audiophile pressings from Mobile Fidelity Sound Labs titles – Pink Floyd Dark Side of the Moon, Led Zeppelin II, Steely Dan Aja, David Bowie Let’s Dance – just to name a few! I think I have at least 15 more titles, including some Beatles, Rolling Stones, and Alan Parson’s Project. There are also a number of Japanese imports that were considered to be much higher quality pressings than the standard Canadian and American releases. 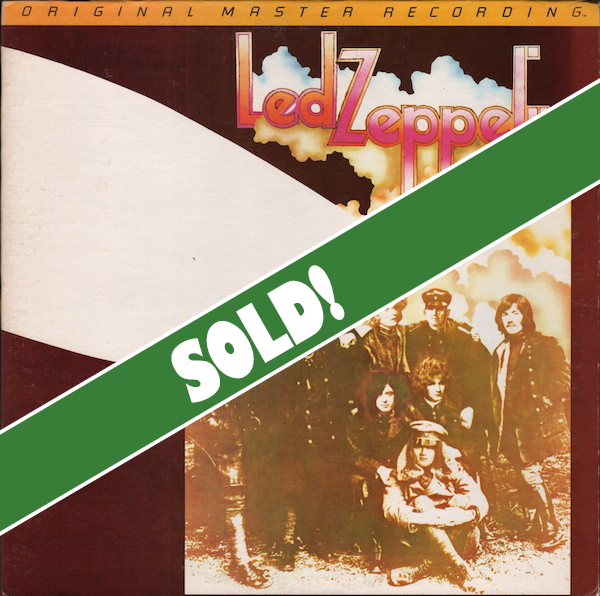 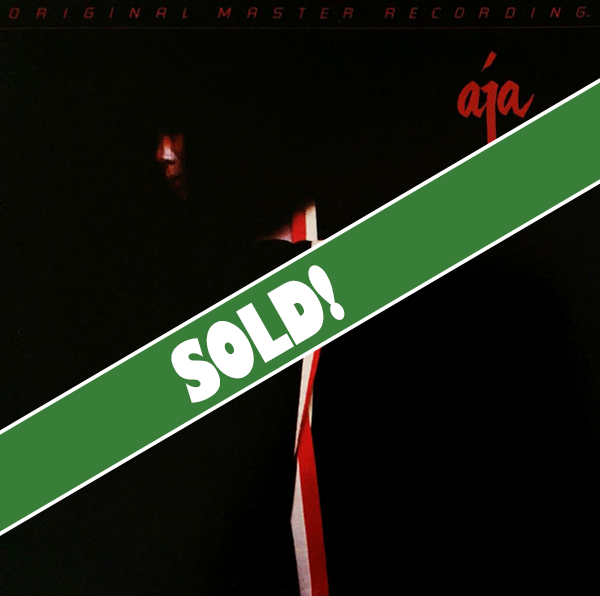 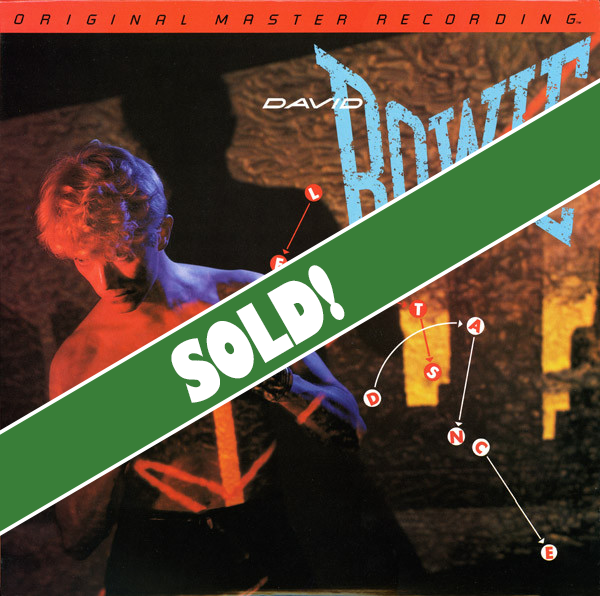 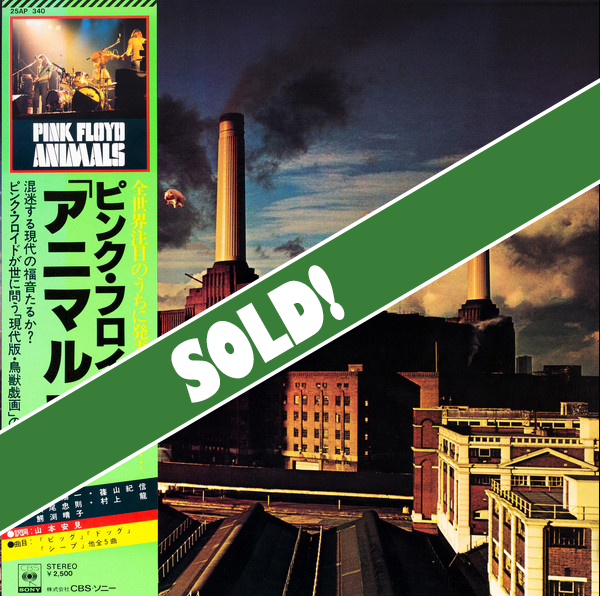 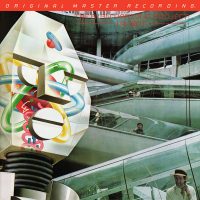 I’ve been pretty fanatical about how my albums are handled and stored, so the bulk of my collection is in amazing condition. I’m sure most could do with a good cleaning – and I did purchase a Spin Clean MKII record washer a couple years ago. It’s a pretty manual process still and very time consuming. Will probably clean as I list 🙂

If you’re interested in seeing what’s for sale at the moment, check out my Discogs store. I’m also trying to sell some using a local Facebook group called #yegdigs.